English philosopher John Locke, 1632-1704, wrote an essay entitled, “Rules of a Society which Met Once a Week for the Improvement of Useful Knowledge, and for the promoting of Truth and Christian Charity.” He outlined how the group should meet weekly, from 6-8:00 PM, to discuss important issues of life.

One had to be nominated by another in the group to vouch for their good character and intent. Members would rotate the responsibility for being moderator, and would propose a question to be discussed. Each person would take a turn offering their thoughts, and discussion would continue until the group was ready to discuss another issue.

In 1727, Ben Franklin formed a small club of enterprising tradesmen and artisans that was commonly called the Leather Apron Club and officially dubbed the Junto. Patterned after Locke’s essay referenced above, Franklin’s group met every Friday night, first at a pub, then in a rented quarters which became the country’s first lending library. There they discussed issues of the day, debated philosophical topics, devised schemes for self-improvement, and formed a network the furtherance of their own careers.

From the book, Benjamin Franklin, an American Life by Walter Isaacson p. 60:

“But, for the most part, with its earnest tenor and emphasis on self.-improvement, the Junto was a product of Franklin’s own persona and of his imprint on the American personality. It flourished with him at the helm for thirty years. Although it operated in relative secrecy, so many people sought to join that Franklin empowered each member to form his own spinoff club. Four or five affiliates flourished, and the Junto served as an extension and amplification of Franklin’s gregarious civic nature. Like Franklin himself, it was practical, industrious, inquiring, convivial, and middle-brow philosophical. It celebrated civic virtue, mutual benefits, the improvement of self and society, and the proposition that hardworking citizens could do well by doing good.”

In 1912, Ernest Solvay, a successful Belgian industrialist and philanthropist, organized and funded an invitation-only conference, held at Brussels, Belgium. This is the first of what would become known as the Solvay Conferences to invite the best physicists in the world to come together to work on outstanding preeminent open problems in both physics and chemistry. 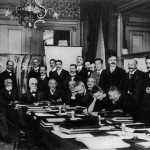 Of the 23 participants (other than Solvay), nine would later to win the Nobel Prize (one of them, Marie Curie, won it twice). Most of the others won other prestigious prizes. 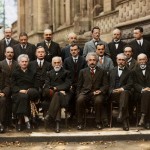 In 1927 the Fifth Solvay International Conference on Electrons and Photons, where the world’s most notable physicists met to discuss the newly formulated quantum theory. 17 of the 29 attendees were or became Nobel Prize winners.

Hi, I'm Jeff Newburn.  My wife Sharon and I run Plan2Thrive Financial Services in Davenport, Iowa.  My lifelong passion is to help others reach their God-given potential.  If you want to find out more about me, click here.

Get Posts by Email